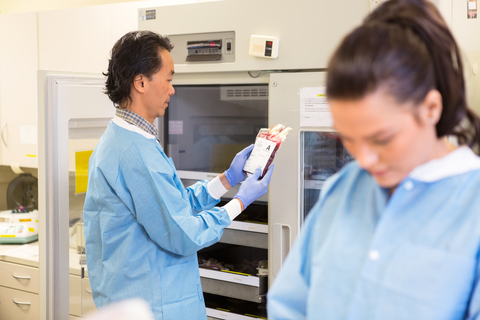 The pioneering medical event was an international effort: Matthew came from North Carolina USA, his donor was his newborn baby sister, the American scientist who stored the cord blood was Dr. Hal Broxmeyer, and the transplant was performed at the Hôpital Saint-Louis in Paris, where his French physician was Dr. Elaine Gluckman.

Matt is now 30 years old, a husband and father, who is alive and doing well today thanks to the wonderful work of the medical pioneers who transplanted him with his sister’s umbilical cord blood.

Matthew’s transplant paved the way for cord blood stem cell transplantation and as a result of his successful transplant, the medical world has now seen over 30,000 transplants performed for the treatment of blood disorders.

As well as that, thousands of promising clinical trials investigate the possibility of stem cell treatment for a wide range of disorders such as cardiovascular disease, diabetes and neuronal disorders.

Reference:
Hematopoietic Reconstitution in a Patient with Fanconi’s Anemia by Means of Umbilical-Cord Blood from an HLA-Identical Sibling at http://www.nejm.org