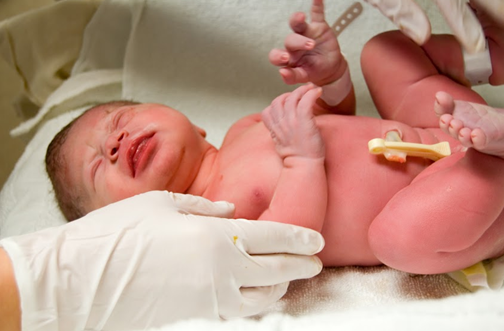 For Ben and Jamie Page, the decision to save their child’s umbilical cord blood was a simple one. With medical advancements occurring so rapidly in the field of stem cell research, they thought preserving the umbilical cord blood would prove a wise decision.  Little did they know that their decision would turn out to be crucial within the coming months, once their child is born.

Their daughter Harlow was born in March, 2008.  At first she seemed like a happy and healthy baby.  When Harlow was 2 weeks old she began to cry more often and seemed to be in discomfort.  Ben and Jamie took their daughter to a doctor who suggested it was colic.

Harlow’s medical problems continued and eventually she wound up in the emergency room at 3 months of age.  A mass was blocking her kidney, with doctors diagnosing cancer as being the likely cause.  There were two potential diagnosis, with doctors eventually determining it was a rare form of brain cancer.

By this point Harlow’s prognosis was grim – she only had weeks or months to live.  The Pages informed doctors that they had kept her umbilical cord blood and the precious stem cells it contains.  It was fantastic news for Harlow, because cord blood stem cell transplants are useful for helping patients recover from chemotherapy.

When Harlow was just 9 months old, she underwent intensive chemotherapy for 5 days to kill the cancer cells.  Then she spent a couple of days in an isolation room and received a cord blood stem cell transplant.  Because she was receiving her own stem cells (autologous), there was no risk of rejection.

Research has demonstrated that umbilical cord stem cells have remarkable regenerative properties.  The stem cells are smart enough to guide themselves through the body to the point of injury.  In Harlow’s case that was the bone marrow where her ability to produce red blood cells had been compromised by the chemotherapy.  The stem cells also helped her immune system recover.

Today, Harlow is a healthy young child.  Her parents feel blessed to still have her and grateful to the medical researchers who discovered the power of umbilical cord stem cells.